One of the great joys (please take this in the most subjective manner you can) in surveying boats is the wide range of corrosion mechanisms and their effects on the variety of metals on offer to the attentive marine surveyor. Finding, identifying and reporting on corrosion effects for a Client is, for me, a fascinating part of my job. “Doesn’t sound like much of a joy” I hear you say, “rust is just rust, right?”.  In this blog I am going to examine a strange form of corrosion found on narrowboats called rust tubercles.

The very nature of boat building requires the use of a wide range of metals, most of which are alloys in some form. Most of these are affected by corrosion in different ways depending on their exact composition, use and location on the vessel. Of course the operating environment plays its part as well but on any given vessel one might safely predict the presence of at least three common types of corrosion being present.

There are many forms of corrosion in nature and plenty to note in marine surveying but one in particular has caught my eye a few times whilst surveying narrowboats in recent years. These are corrosion by-products known as rust tubercles. These are indicative of advanced stage marine growth leading to the formation of oxygen concentration cells – localised, enclosed pockets containing anaerobic, often mildly acidic stagnant water. These become self-perpetuating organic colonies and the resulting corrosion can sometimes, but not always, lead to deep pitting and pin holes perforating the steel plate. 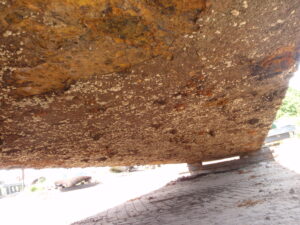 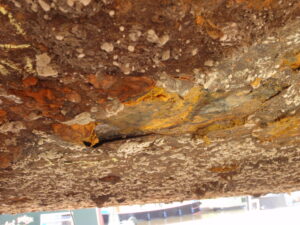 Rust tubercles are easily identified by the brown exterior surface of rust (Fe2O3) and the black interior / bottom surface of magnetic iron oxide (Fe3O4). On those hulls where I have noted them they were typically present in moderate density (typically 30 or less per square metre), with sizes ranging from 30mm to over 100mm in diameter. 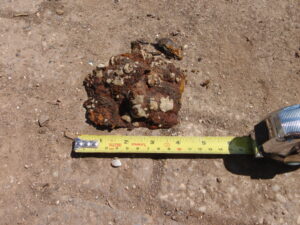 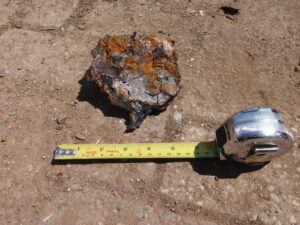 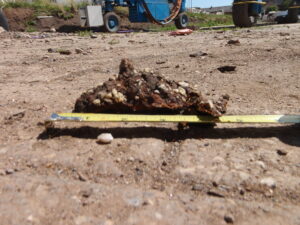 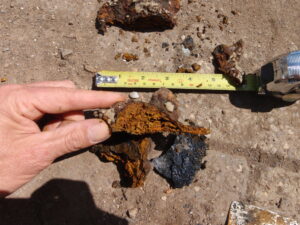 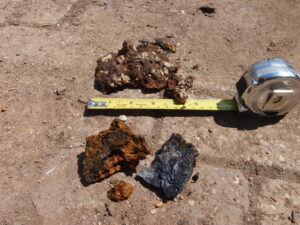 The tubercles can usually be scraped away relatively easily and quite often in one satisfyingly large intact ‘scab’ to expose the black interior surface. This makes it possible to get an ultrasonic thickness reading in close vicinity to the pit typically found in the centre beneath the tubercle. When pit depths beneath larger tubercles are measured using a dial type micrometer, pit depths in excess of 4mm depth are relatively common which on a 6mm original bottom plate thickness would give a pit depth plate thickness of just 2mm! This would be well below the ‘insurable minimum’ plate thickness expected by insurers and remedial work would be deemed essential. 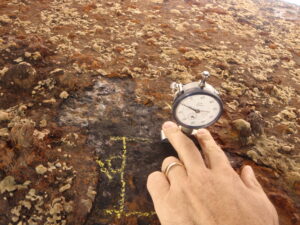 The density of the pitting seen on this bottom plate is remarkable in itself but the average depth of pits was 2.0 – 4.0mm with a few pits deeper than 4.0mm. 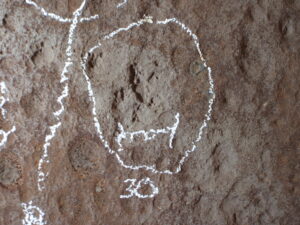 The chemistry of these rust tubercles is as you might expect rather more complex than this brief description might suggest. The process of tubercle formation is often, but not always, linked to microbial action. The chemistry at work within the tubercle may result in a more acidic local environment with the presence of hydrogen sulphide; a poisonous and corrosive substance. Hitting a rust tubercle with the hammer whilst percussion testing usually results in a liberal splash of rust fragments mixed with stagnant, acidic ‘water’ – nice. Just one of the many reasons to wear safety goggles when percussion testing steel hulls.

As a corrosion mechanism in itself there is very limited technical literature on the subject and no reference is made to rust tubercles in any of the Marine Surveying textbooks that I have acquired over the past decade. There are a few publicly available technical papers that refer in part to the formation and chemistry of these fascinating corrosion mechanisms. In ‘Tubercles and Localized Corrosion on Carbon Steel’[1] the authors concluded “the presence of tubercles on carbon steel cannot be used to conclude localized corrosion directly under the tubercles or a role for bacteria in their formation”. In their paper ‘The anatomy of tubercles: A corrosion study in a fresh water estuary’[2] the authors reach the same conclusion as noted earlier and go on to conclude “Tubercles are found in association with deep pitting and on surfaces with little or no pitting”. In essence, removing any tubercle is a lucky dip; what lurks beneath is in no way certain and deep pits are every bit as likely as any other form of localised corrosion.

In summary, there is no effective way to predict the formation of rust tubercles nor the likelihood of severe pitting resulting from their formation. Where found they present an ongoing risk to the integrity of a steel hull and action must be taken to clean them away, make good any thinned steel due to pitting or perforation and then to prime and re-paint the steel to prevent further tubercles forming. It has been my experience that narrowboats that have not had their bottom plate periodically cleaned and re-painted are most prone to rust tubercles. In a previous blog[3] I extolled the essential need for ‘Cleaning Your Bottom’ to preserve hull thickness. The oft given excuse by boatyards for not cleaning and re-painting the bottom plate is that it would “only rub off”. Of course if that were true, so would all of the rust tubercles!

[3] ‘Cleaning Your Bottom’ – The musings of a Marine Surveyor in Devon after a decade of surveying boats in the UK and Europe.